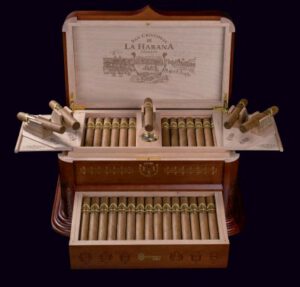 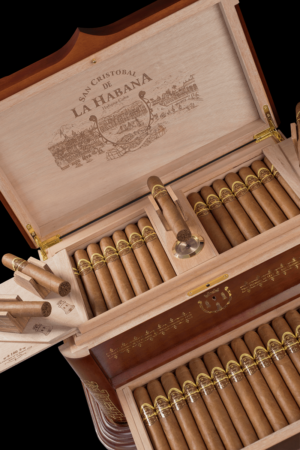 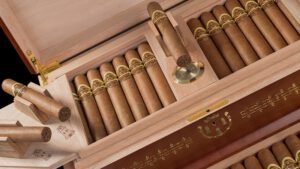 The original name with which the city of Havana was baptized when it was founded in 1519 was San Cristóbal de La Habana. “San Cristóbal” in honor of the saint of the day the city and Havana were founded by the Indian name of the place. This brand was launched in 1999 as a tribute to the long history of the Cuban capital, at the dawn of the new Millennium.

Today, the city that gave the brand its name celebrates its 500th anniversary and from Habanos, S.A. tribute is paid with the launch of a Humidor designed and produced by artists / artisans from DECUBA Arte en Madera.

Each piece is made entirely by hand with careful craftsmanship; using Cuban cedar and 100% special ocume plywood, reinforced hardware with gold baths and personalized with the word HABANOS.

The Habanos selected for this Special Series of 500 humidors, are made with the flavor territory of the brand, strength from mild to medium. The vitola has the following dimensions: Ring gauge 57 x 170 mm long.